For my Love for Bread, Can I Give Up Carbs? 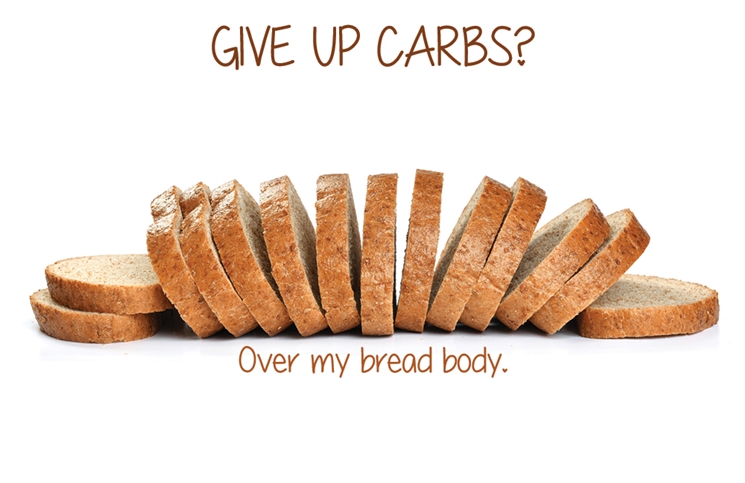 After what seemed like a struggle to get into this dress, I finally managed to fit in, no it wasn’t me, I think the dress got smaller. This event was not for small gees, so I had to rep.  I settled for this dress because it’s one of those “killer-dresses” I had because every time I wore it I literally felt eyes follow me. How do I look? Looking at the mirror and stretching from one end to other in a bid to make it cover all ends equally; Mirror, mirror on the wall, who is the owner of that bulging stomach? Not me fam, like how did I get to this point? Truth is, I love me some bread to a fault! Have you tried Cinnamon Raisin bread?

Well, I decided to share my food story on Communeating below is my reaction to bread lol

I said to myself, “Cut down on your carbs, you will not hear, now lukatchu!” But abeg abeg, over my bread body if its bread that will stop this my fitfam body, so be it!  This love no be today, love that almost put me into trouble. See I don’t joke with my bread o, everyone knows. I remember back in law school, there was this guy who I liked and he liked me but he was playing along with my good girl life. I would tell my friends how he was so lovely taking it one step at a time with me until one day, we had gone on our normal waka to buy bread from Grand Square just behind the hostel, and God bless the person that opened our eye to that bread. As we came back, who did we see on the corridors of the female hostel wing in a compromising position, my supposed bestie, I managed to walk past them like there was nothing, then I went into the room immediately shouting burst my head, my friends said the moment I flung my Grand Square bread, they knew the thing pained me, lol.

I have entered yawa plenty times because of this bread-love but this one was not one to forget in a hurry, like I saw death walk past me, yes!  That close. My love for Grand Square bread was a carryover from law school in Lagos down to my life now in Abuja, I tried to have relationships with other bakeries but no one was enough to make me break up. NEXT bread tried but well, I cheat on Grand Square because sometimes the main chick has a way of staying fresh in this relationship.  I had come back late that night from work but Daddy had made plans that when I got back from work, I would go buy Bread from GrandSquare, I would have declined to see that it was past 8 pm already but the next day would be Saturday, no one would love for their sleep to be interrupted just to go buy bread and more so considering the stress having bread for dinner would save me tonight.

The baby brother was watching one of his favourite TV show and he sought every valid reason why we should postpone this bread trip. How bread got this part in my food heart after beans and plantain, of course, is something I can’t explain. It was easy to have it if you wanted it to study abroad just add some Nutella or Peanut butter if you wanted it to study in nearby countries add some butter mainly blue band, but if you wanted it to study in your local university, add some jollof beans toppings.  I had tried to convince the baby brother saying, “don’t worry the same cab that will take us there will wait and bring us back”. This was late in the evening so there wouldn’t be any queues. This was Wuse 2, it was not a big deal to get a cab. “Oga, we dey go Grand Square, how much to take us there and carry us come back?” We had a quick bargain and off we went.

So, we had arrived and gotten our bread, and as was envisaged, we did not spend too much time. On getting the bread o, such sweet victory but then, wahala came just on our way home. We were about going into a sharp corner when we heard this loud siren come closer, but because we were on the right lane and the car was coming from the opposite direction, my aboki driver continued with some speed, I mean we were right on track or so we thought. Just when we were supposed to turn to the left, suddenly this heavy light flashed deep into our faces and the noise following skkkrrrrrrrrrrrrrrr from our tyre, all I and my brother could shout was Jesus. The car coming was a fire service car and because of the urgency, it took a one way turn into the left towards us and without any signs whatsoever, if we had by chance gone 1-second faster, he’d probably had rammed into us but God was faithful to save us.

Then, we went on a bread roll home…

As we rode home, at first I started shouting at the aboki, but on a second thought I imagined that if anything had happened, the story would have been – She went to get bread at Grand Square and then this or that happened. Till we got down from the car, I was shaking, I was scared. So, got home and was numb from the events, it messed up my psyche such that I did not have that bread that night. Quietly, I had cornflakes and went to bed. I woke up at night remembering the incidence but it was just temporary because, by the next day, I had sent my bread on some scholarship scheme to get an MSc in toasting. All that one is a story, I think I got worse after that event, one would have thought I would dislike bread but they know nothing.  Like mix that flour, mix it with love, add the right amount of sugar and bake it, I really don’t care what class of food it’s in my love, one thing is sure, our love can’t be severed but bearing the consequence of this love was what I was facing right now standing in front of this mirror with a bulging tummy. Thankfully, I can get me a nutrition consultation and assessment with Diet234’s consultant. But right now, my “suck belle” skills have to play a vital role in saving me today, oyaa leggooooo, let’s go turn up.