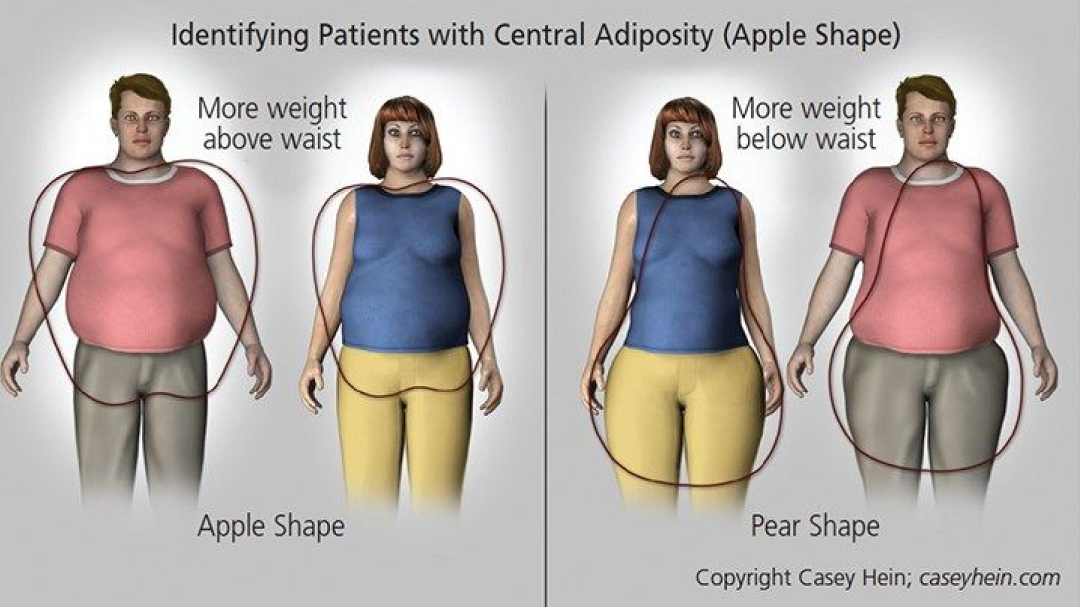 An early observation of the fat distribution in human bodies

French physician Jean Vague earlier (over 50 years ago) observed that people with larger waists had a higher risk of early-onset heart diseases and untimely death than people who had slimmer waist circumference or had more of their weight around their hips and thighs. (1)

Follow up studies in the following years found that even after controlling BMI (keeping it at a healthy range), abdominal obesity (fat in the abdominal area) is associated with a high risk of type 2 diabetes, heart diseases and ultimately death. The Nurses’ Health Study found that even women at a “normal weight” BMI less than 25 were at a higher risk if they were carrying more of that weight around their waist: Normal-weight women with a waist of 35 inches or higher had three times the risk of death from heart disease, compared to normal-weight women whose waists were smaller than 35 inches.

More recently, according to Molecular and Cellular Endocrinology, 2013, a body fat distribution leading to an increased waist-hip ratio (WHR) appears to have a more harmful effect than bodyweight alone. This simply means that the area where our body fat is distributed or located is a potential health hazard than the actual amount of body fat we have.

So, why is visceral fat so bad?

This is because of the metabolic activity of visceral fat (fat around the liver and other abdominal organs of the body). This fat releases fatty acids, inflammatory agents, and hormones that ultimately lead to higher LDL cholesterol (bad cholesterol), triglycerides, blood glucose, and blood pressure. (6)

The body types based on fat distribution

There are two classic body types concerning body fat distribution. They are;

The Greek prefix “andr-” refers to man in the masculine sense. So, android here refers to the upper half of the masculine body that is above the waistline. In android fat distribution, arms, stomach, and waist have fatty deposits around them resulting in an apple-shaped body type. This apple-shaped body type is common amongst men. This is probably because they have a body structure that allows broader shoulders and bigger chests. And of course, a high tendency to store fat in the belly as seen in those who have “beer bellies”.

While gynoid pertains to the female human form. So, gynoid fat is the fat distribution mainly associated with female hormones. The main areas affected are the hips, legs, and buttocks. This kind of fat distribution makes your body shape appear like a pear. It is typical to females and is stored sub-cutaneously. It is stored above the muscles and right under the skin. Generally, women are seen to accumulate fat more around the hips and thighs. Although, some can also develop an apple-shaped body especially in post-menopausal women.

What can I do about android and gynoid obesity?

For men, we advise that you get involved in exercises specifically targeted for upper body fat loss. Also, reducing daily caloric intake. The prime cause of fat accumulation in the human body is the excessive intake of calories. This is due to inadequate burn calorie burn through daily physical activities. Get wellness report here.

For women, taking part in exercises like step-ups and generally increasing your activity levels. This can help reduce the wobbly effect that women face due to gynoid fat. Strength training is another effective solution for it. Also, watch your calories intake and activity levels.

Men and women may want to explore LPG Android and Gynoid treatment. This is a solution that technology has to offer for people with android and gynoid fat distribution in their bodies.