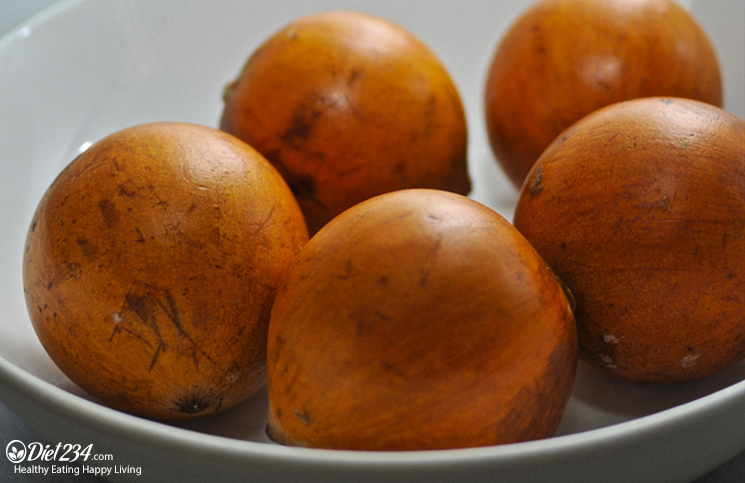 From December to April each year, you are likely to see the African Star Apple displayed on trays by our road sides and in our markets. Even though it tastes somewhat sour, it is enjoyed by most people. It is known by the Igbo and Yoruba tribe of Nigeria as ‘udara or agbalumo’ respectively. It is botanically known as Chrysophyllum albidum.

The fruits are sub-spherical in shape, about 3cm in diameter, usually 5-celled and contain an edible, sweet fruit-pulp. The fruit, a true berry, contains five flat or bean-shaped seeds enclosed in shiny, brown seed-coats. The seed has a long hilum running from one end to the other. Both the brown seed-coat and the prominent hilum uniquely identify seeds of all plants belonging to the family Sapotaceae. But why is the locally known ‘udara or agbalumo’ called African star apple? You may ask. Let’s start from the last word—apple.

Apple is used here because the fruit is shaped somehow like an apple. And the word ‘star’ is used because the 5 seeds in the fruit are arranged in a star-like manner when opened widely. While growing up, I always look to find any with less or more than five seeds. Well, my search was futile. A recent study by researchers at the Department of Biological Sciences, College of Science and Technology, Covenant University, Ogun State, Nigeria, showed that the fruit lowered blood sugar and cholesterol, and could be useful in preventing and treating heart diseases. Another study by researchers at the Forest Research Institute, Ibadan, Oyo State, Nigeria, showed that the leaves of African star apple exhibited strong anti-bacterial activity against common bacteria isolates. Star apples may have particular benefits for diabetics. Research published in the September 2009 edition of the “African Journal of Pharmacy and Pharmacology” indicates that the leaves of this fruit may reduce glucose levels in diabetic rabbits, the same function that insulin serves. However, consuming star apple leaves appears to have a toxic affect when eaten in large quantities. More research is needed to determine the effectiveness of the African star apple leaves to control diabetes in humans. The star apple is a folk remedy in several countries, as many other foods have folklore. Although, no research exists to confirm these uses. The seeds of this fruit may be useful to reduce fevers and treat diarrhea. Some people also eat this fruit to reduce the inflammation associated with laryngitis and pneumonia.

Other uses, including treatment for hypertension, tooth abscesses, heart problems, and intestinal issues. It contains more ascorbic acids than oranges and even guavas. Ascorbic acid is useful in treatment of scurvy and in protecting the body from infections. Eating a serving of star apple contributes 3 g of fiber to the recommended daily intake of 25 to 38 g. Fiber provides bulk to your diet, a factor that can make your stomach feel fuller for longer which in effect can aid in weight lose. Since the fruit is seasonal, Prof. Onimawo, a public health nutritionist advised that the fruit pulp could be extracted and packaged in bottles and stored in refrigerator for proper preservation. African star apple is nutrient packed and can be enjoyed by every one both young and old.

Nutritional Analysis
As conducted in the Food Science and Technology Laboratory, Rivers State University of Science and Technology for nutrient content. The analysis showed that Chrysophyllum albidum has an approximation of carbohydrate (11%), crude fibre (4%), Lipids (3%), protein (7%), Calcium (17.11ppm), Iron (< Ippm), phosphorus (9.92ppm), vitamin C (25.03ppb), A (10.74ppb), B1 and B2 (< 1ppb). It is recommended that the awareness of the nutritive value of this species be created so as to increase it’s consumption as food supplement to the larger population and expand its utilization.