The Choice between Bitter Kola or Kola Nut? 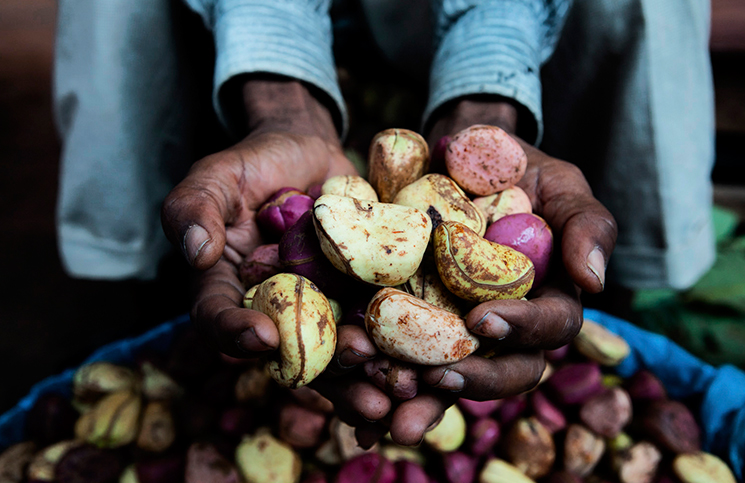 I’d rather eat unsweetened food than bitter food. Unlike me, most people have a sweet tooth. But it all comes down to the fact that you can’t enjoy bitter foods unless you learn to like them. The bitter kola is bitter, whereas the kola nut is slightly bitter when chewed but leaves a pleasant sweet aftertaste. And they both have numerous advantages!

The kola nut is derived from the kola tree, an evergreen found in tropical Africa. Kola nuts are small, round or oval in shape, and come in a variety of colors ranging from brownish-white to light green to pink to dark purple. They resemble large chestnuts and have a nutmeg-like aroma.

Bitter kola, also known as Garcinia kola, is a tropical flowering plant native to western and central Africa that yields brown, nut-like seeds. It contains dimeric flavonoid, which is thought to have many healing benefits and has been used for centuries in African culture for medicinal purposes.

Although studies have shown that kola nuts contain approximately 2% caffeine, they are thought to contain more caffeine than coffee. Glucose, starch, betaine, and protein are also components of kola nuts. A suitable dose for energy is 1 to 2 teaspoons of powdered kola nut mixed with a liquid such as water or milk.

The stimulants caffeine, theobromine, and theophylline are found in kola nuts. Theophylline relaxes smooth muscle and dilates bronchioles in the lungs, which helps asthma and bronchitis patients. Theobromine increases heart and brain activities, dilates blood vessels, lowers blood pressure, and dilates bronchioles in the lungs. Kola nuts contain caffeine and other stimulants that, in addition to opening the blood vessels and lungs, provide energy to those who suffer from chronic fatigue and tiredness.

The kola nut is a stimulant of the central nervous system that suppresses appetite and aids in weight loss. It slows metabolism and gives you an extra boost of energy, which can help you with aerobic exercises as part of a general weight-loss plan. Garcinia kola suppresses appetite as well as interferes with your body’s ability to produce and store new fat, causing more of your own stored fat to be burned for energy.

It works by increasing the amount of serotonin in the brain. Serotonin is a neurotransmitter, or natural drug, that the brain uses to control mood. This is why carbohydrate bingeing is so common in people who are depressed. Your brain understands that eating carbohydrates will provide it with more serotonin. Bitter kola prevents carbohydrate bingeing by increasing serotonin levels, allowing you to have a normal, healthy appetite for fresh, nutritious foods. As a result, it is especially effective when combined with a low-carbohydrate diet. Dieters can, in effect, snack on kola nuts or bitter kola!

It can also lower harmful LDL cholesterol and triglyceride levels in the body. Garcinia Kola works by inhibiting the actions of an enzyme in your liver called ATP Cytrate Lyase, which prevents carbohydrates from being converted into new fat. This enzyme is responsible for the conversion of carbohydrates to fat and is also involved in the production of cholesterol.

Kola nut is said to boost the body’s production of gastric acid, which is known to promote healthy digestion. It can be used to treat diarrhea. Some West African tribes chew kola nut before every meal to aid digestion.

Bitter kola is well-known for its anti-inflammatory and antioxidant properties, which make it useful for preventing infections and viruses, particularly those affecting the immune system. It is frequently used to treat cold symptoms. It is especially recommended for coughs and sneezing.

Kola nuts were primarily used in the production of cola beverages. However, most mainstream colas have substituted a synthetic replica for the original kola nut extract. Bitter kola, on the other hand, is used as a substitute for hops in the production of lager beer because it is particularly effective in preventing beer spoilage.

In a 2003 study, researchers discovered that consuming large amounts of kola nut (35mg per day) resulted in malaria-like symptoms. Caffeine-containing foods can have negative side effects such as disrupting sleep patterns and increasing heart rate. This can be problematic for anyone with a heart condition.

So, do you prefer bitter kola or kola nut? Personally, I like both!